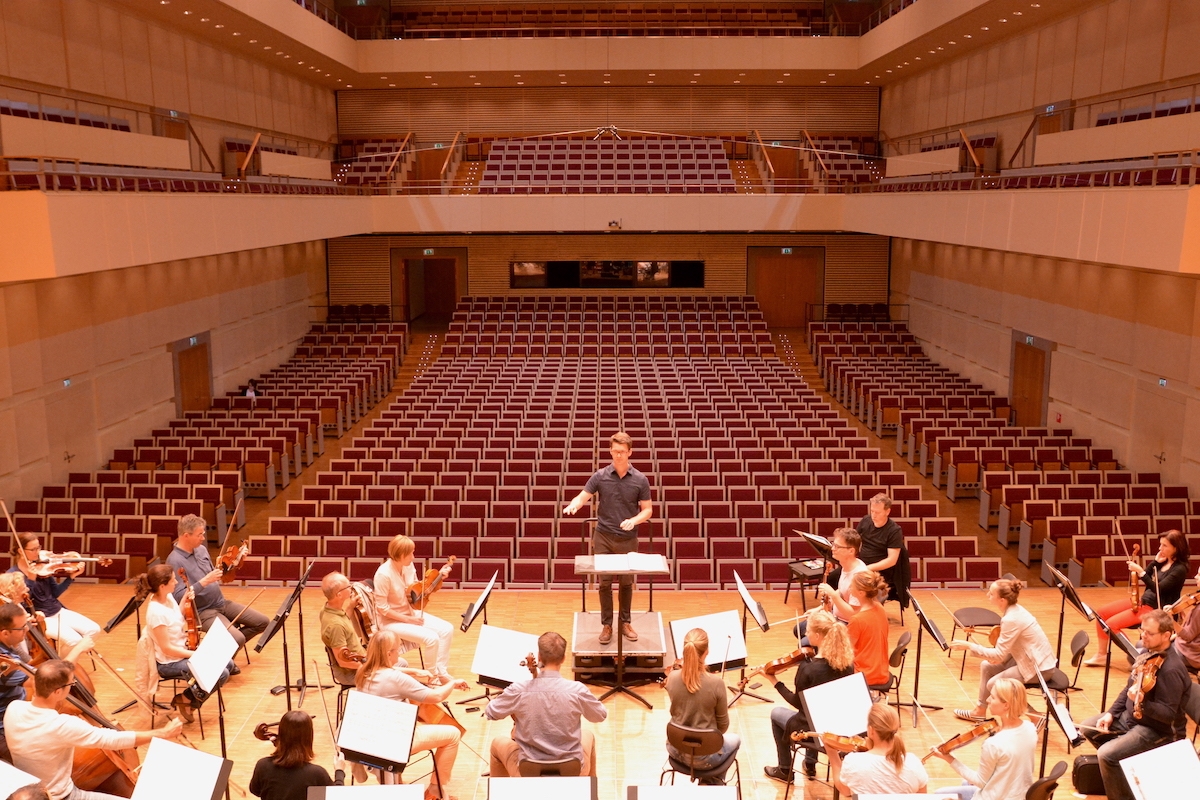 Edo Frenkel and David „Clay“ Mettens are two young musicians and composers from the United States who participated in the 2017 Composer-Conductor workshop INK STILL WET directed by Brad Lubman. Their reports on their colaboration with the Tonkünstler-Orchester Niederösterreich portray the birth of two exciting pieces of music. The premieres took place on 22nd August in the Auditorium Grafenegg.

Since the end of the Grafenegg Festival’s INK STILL WET program I have a spent a great deal of time reflecting on the transformative experience that it was. One obvious reason why it is such a marvelous program can be described in the program’s unique premise: to grant a young composer the opportunity to shape and meld a performance of his or her music through conducting their work. However, this description is inadequate in expressing the breadth of the festival and what makes it so special. For me, there was a natural process of growth: as the rehearsals continued my work transformed. The piece changed into something beyond what I had imagined. Something that I wasn’t sure whether it belonged to me or to the orchestra, or to both of us. A connection had developed between my physical movements, the orchestras, and the ensuing sounds.

Conducting one’s own music is an odd thing. It suddenly makes one responsible not only for the ideas of a piece but for the way they are represented and understood. This process makes one hyper aware of the complexity of one’s ideas and this vulnerability is perhaps the most important aspect and reward of participating in INK STILL WET. As we continued to rehearse and I opened myself to whatever shape the piece was meant to take I could feel myself and my musical ideas changing for the better. I was flooded with ideas and the exhilarating sensation of adventure, as if I had heard my music for the first time.

Moreover, I could feel that all of us participating composers were feeling similarly. Through the expert guidance of the mentor, Brad Lubman, our vulnerability morphed into a kind of chemistry between us, the great musicians of the Tonkünstler Orchestra, and the sound of our music that flooded the hall. It was only after the performance that I realized that through this process and hearing each other’s music in this way that we had come to know ourselves and each other in a very deep way.

For me, this was the real magic of Grafenegg: the composers, our mentor, and the orchestra, all arrived with seeds of expectation. And through our work together, as our chemistry evolved, an enriched creativity blossomed and continues to flourish even after we’ve left. This experience has substantially influenced me musically and will remain with me as I continue to develop a career and grow as a musician. I remember the tree planting ceremony that opened the Grafenegg Festival. I can’t help but wonder if that’s what’s happened to us: we’ve now all been securely planted, musically taken root, having bee nourished by the creative soil at Grafenegg.

Towards the end of the Ink Still Wet program, I began thinking of the conductor as an intermediary between the composer’s abstract, intangible score, and the physical actions that are necessary to produce the music. In this role of intermediary, the conductor’s main task is to communicate—to communicate the needs of the score to the musicians and to facilitate communication between various members of the orchestra. Besides the obvious musical skills that a good conductor must possess—excellent ears, steady sense of pulse, understanding of playing techniques for many instruments, etc.—a conductor must also be sensitive to the interpersonal dynamics involved in performing music.

Conducting the Tonkünstler-Orchester at Grafenegg was my first experience in this role of intermediary. I learned so much about what it means to perform this important task from the conductor/composer mentor Brad Lubman, and also the musicians of the orchestra. In my conducting lessons with Brad, I strove to clarify my physical gestures and use my movements to constantly reassure the orchestra that they were in the right place in the piece. He encouraged me to think of conducting as playing an instrument, imagining the movements of my hand like the precise clicking sound of a wood block. Or, alternatively, to try to empathize with what the players had to do with their instruments to produce the sounds I called for, and keep that in mind as I settled into comfortable tempi for the different sections of the piece. On the first day of rehearsals, I was conducting the piece too quickly, causing some rhythmic passages in the woodwinds and marimba to feel frantic. In the second day of rehearsals and the dress rehearsal, I followed Brad’s advice and used the marimba part as a guide to imagine how fast or slow the piece should go.

Another interaction with the concertmaster further emphasized the importance of communication. In one passage, I had divided the first violin section in two, and asked half of them to play a tricky sequence of rhythms with some of the second violins. He suggested that dividing the upper strings like this reduced their ability to communicate with one another, making these few measures tenuous and uncertain. This was a fascinating example of how an interpersonal issue—the upper divisi of the first violins feeling disconnected from or unable to communicate with the second violins—could have such a profound impact on their musical realization of the passage.

I think all of my experiences in the Ink Still Wet program will continue to inform my work as a composer. Both of the examples I cited above highlight the importance of considering the people who play the instruments, and not just composing abstract constellations of pitches and rhythms. While constructing my pieces, I can be mindful of reinforcing when the musicians act together as a group and when they are required to be very independent. And now that I’ve had this valuable experience as a conductor, I have better ideas about conveying my intentions as clearly as possible so that conductors may in turn communicate them to the musicians of the orchestra.